4 Cookbooks That Feed Your Family In More Way Than One 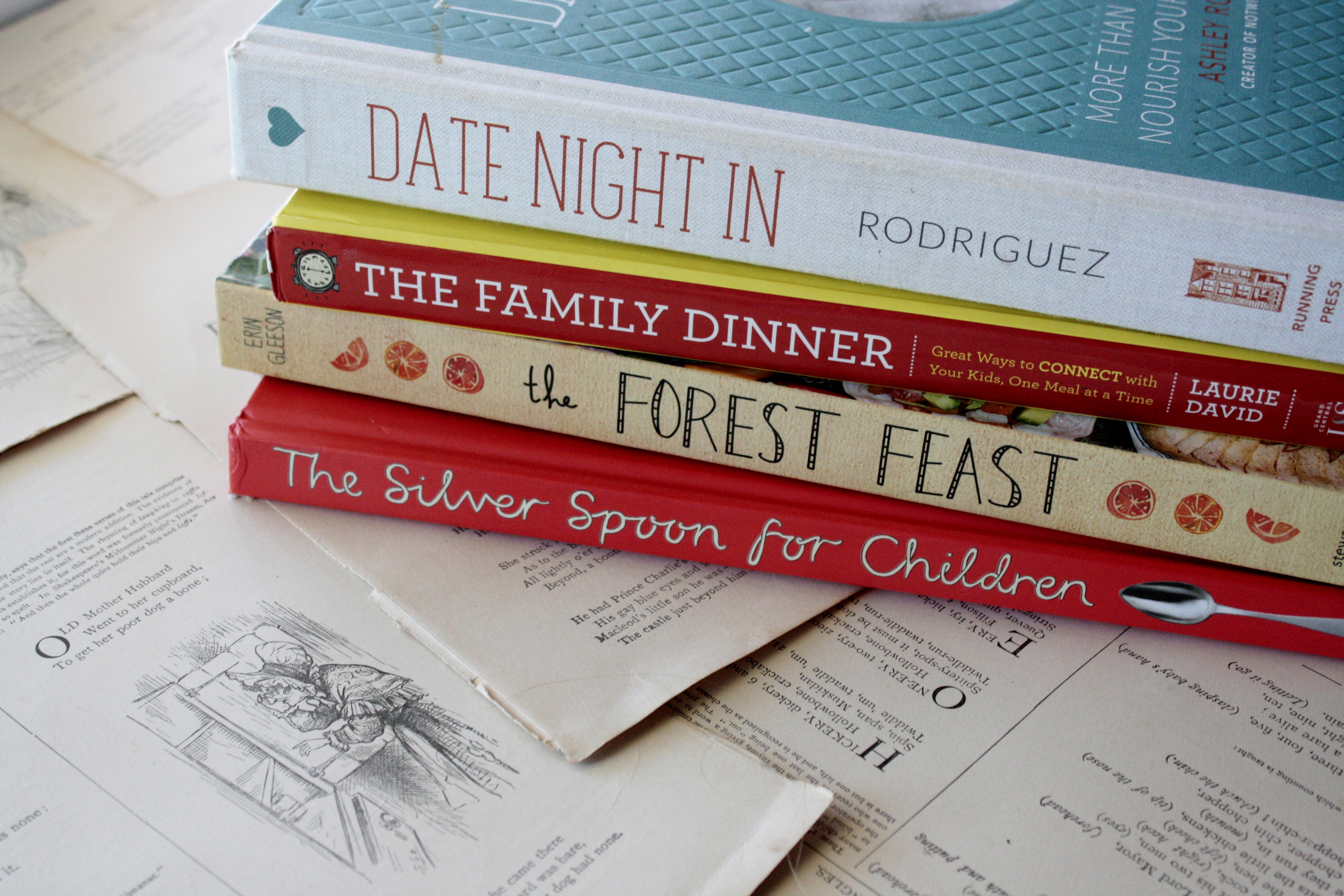 Cookbooks aren’t the standard fare of this blog, I know. But these all have something extra, something that makes them fun to read and that feeds your family more than just food. They contain fuel for dinner table discussions, incentive to take time out with your spouse or to invite your kids into the kitchen as you cook.

My copies of these four books are heavily annotated and dog-eared beyond the point of respectability. And, really, that is the best endorsement I can give any cookbook.

Some books travel through circles of friends, like parenting books or North and South. I encountered The Family Dinner while standing at my friend Jessie’s kitchen island, flipping through it while she chopped peppers for dinner, and resolved to buy my own copy as soon as I got home. I have since passed my copy to friends as we chat over cutting boards and cold beer in my kitchen and have seen it spring up on their own shelves later.

This book is part cookbook, part treatise on the whys and hows of the family dinner. Laurie David is passionate about encouraging families to come back to the table and, to that end, includes everything from celebrity interviews on the importance of family dinner to tips on decorating a table, growing your own food, and cooking with kids. Two whole chapters at the back are filled with ideas for starting after-supper conversations and approaching meals with gratitude.

And then, there are Kristin Uhrenholdt’s recipes. I have come awfully close to cooking my way through this book multiple times, and I have yet to find a recipe that I didn’t like. There was one I made the night I felt queasy—I’m reluctant to revisit that one. But the recipes here get a lot of flavor from a few simple ingredients and run the spectrum from comfort food to fresh, inventive, healthy food. I miss beef when I cook from this book too regularly, but that’s an okay problem to have.

Date Night In, by Ashley Rodriguez

Ashley and I were, for a time, members of the same church. She had a baby, I did not (was there ever a time when I did not?), and I loved spending time with her in her sunny kitchen, learning to butter papery folds of phyllo while making covert mental notes on how to care for both phyllo and babies. I don’t remember just how it happened, but eventually I ended up working with her as a sort of apprentice/minion in her dessert catering business. From her learned how to make a pristine meringue, a sunny lemon curd, and a life-changing chocolate chip cookie. (I never mastered the lemon curd; I still make the cookies almost weekly.)

I also learned that a broken salted caramel macaroon is a good thing for the minion, because she gets to eat it.

I tell you this because you should know that I have a definite bias toward this book. But you shouldn’t let it color the way you read the rest of this sentence: this cookbook is one of my top two cookbooks (the other one is listed above). I bought the book because I know Ashley and I know Ashley’s food and I would gladly pay $20 to have a little more of either Ashley’s company or her food, but I love Date Night In because I have cooked my way through over half of the recipes and have yet to find a dud. I have found, instead, a pulled pork recipe that has taken precedence over all other pulled pork recipes. I have found the inspiration to make my own hamburger buns, my own pickled peppers, my own cream soda. I have found a recipe for brownies that I can only look at on days when I feel prepared to eat half a pan of them by myself.

The book is a collection of menus based on Ashley’s weekly at-home dates with her husband, Gabe. They feature drinks, appetizers, entrees, salads, and desserts, and while they’re a little fancier than our usual mid-week fare, they’re easily adapted to suit tighter schedules, smaller budgets, and larger families. In their full form, they’re perfect for special occasions—like dates with my husband.

So many of these recipes have become staples in our home that choosing between them was painful. But here is the shortest list of favorites I came up with (of course, every other recipe mentioned in this post qualifies, too). They may not sound fancy, but they taste fancy. And that is enough:

The Forest Feast, by Erin Gleeson

When you buy a new cookbook, you don’t expect your six-year-old to run off with it before you can read it and return the book two hours later, having read it from cover to cover. But that is what happened when I bought The Forest Feast, and given the beautiful illustrations and my daughter’s affection for food I suppose I shouldn’t have been surprised.

The emphasis of The Forest Feast is on entertaining, so the recipes are quick to put together and simple—few have more than five ingredients. They’re vegetarian, but easy to corrupt with a little prosciutto or sausage, and they’re great fare for birthday parties, quick dinners, and potlucks.

But here is what I love best about this book: because of the beautiful format and simple instructions, this has become a favorite for Lydia and me to use together. When planning parties, I can hand it to her and say, “Pick out five things you’d like to make. They can’t be too expensive or too time-consuming to make, and we can’t use forks to eat them. Go!” It’s like a scavenger hunt, except she’s learning party-planning life lessons like “More than one kind of cheese makes a recipe expensive,” or “Mom will only cut so many leeks.” And we get to eat the reward.

After she’s chosen, more often than not, there’s at least one recipe that she can tackle alone, like dipped strawberries or apricot bites. And she often pushes me to try something just a little fancier than I might have otherwise, because her beautifully child-like lack of foresight is good for my tendency to overthink things.

And the book’s design? Beautiful. Stunning. So pretty it merits a few extra pictures.

Now you know why Lydia absconded with it.

The Silver Spoon for Children

We have a few cookbooks made just for kids. They’re fun and the recipes in them aren’t terrible, but they lack some quality that The Silver Spoon For Children has in spades. Besides the charmingly illustrated recipes, this book has a clear intent to teach kids to cook—to savor food, to prepare it well, and to know their way around a kitchen. None of the recipes here are intended to make food shaped like animals; not a single one calls for sprinkles. But there is a recipe for homemade pasta, and there is one for chicken breasts stuffed with mascarpone.

Perhaps I’ve made The Silver Spoon For Children sound like a serious tome meant to turn kids into somber creatures, dithering between this spice and that one. It’s not. The illustrations bring a bit of wit and playfulness to each recipe, and the visual layout makes it fun to work through with kids. Many of the recipes are still too advanced for my young chefs, but I love asking them to pick a recipe for the week’s menu (consequently, the book falls open at the recipe for macaroni and cheese) and call out the recipe’s steps while I make it.