A Wrinkle in Time (and More!) | Madeleine L’Engle 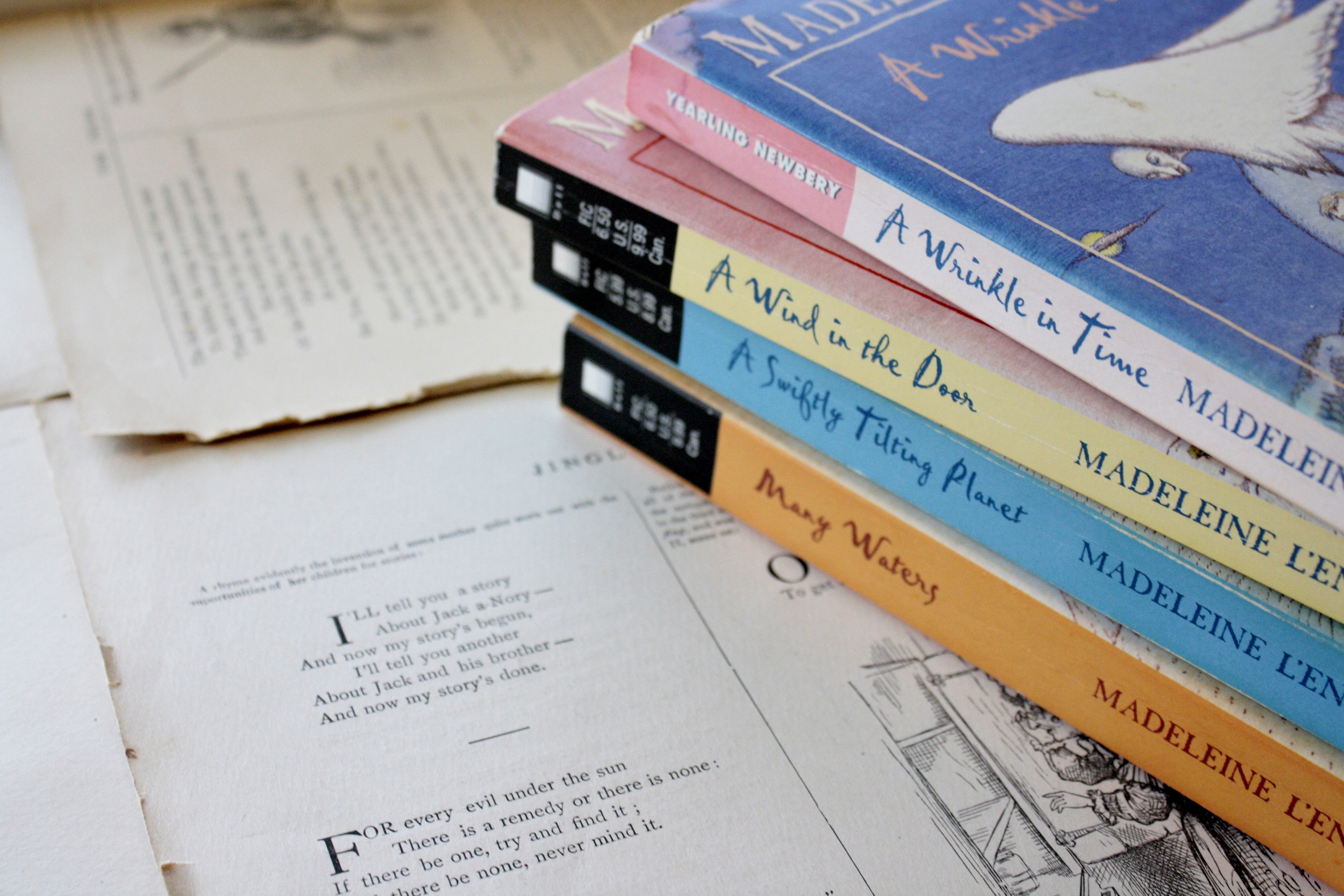 In the past, I’ve been pretty bossy about reading series in their entirety. I came down pretty hard on you about The Chronicles of Narnia (all of them), Anne of Green Gables and the Little House books, but you’ll be relieved to know that I’m not sending you away from this post with your reading list eight or nine titles longer than it was when you arrived.

But then, this is no ordinary series. In fact, it’s less of a series of sequential books than it is a loosely gathered group of stories that dip into the same family of characters, overlap occasionally and share a few common themes. In that way, it’s a bit like The Chronicles of Narnia, but the stories diverge even further from each other than the Narnian chronicles, to the point that I don’t think there’s even an official title for the entire group—at least, I couldn’t find anything snappier than “Books about the Murry-O’Keefes”—so I suppose I’d better begin by outlining to which books, specifically, I am referring.

The Newbery-award-winning classic, A Wrinkle in Time, starts us off with an unforgettable bang. The next two books, A Wind in the Door and A Swiftly Tilting Planet, follow the original protagonists, Meg and Charles Wallace Murry, on further adventures while the fourth book, Many Waters, centers around a more peripheral pair of characters (and is, for the record, one of my favorites in the series, though you should definitely pre-read it before handing it to your child. Some of the themes are a bit mature, though not inappropriately so). It’s different in tone, topic and tactic than the first three.

Thus ends what was once officially considered “The Time Quartet,” though the quartet has recently been expanded to a quintet, with the addition of An Acceptable Time. I get why the books were rearranged, but—I’ll be honest—I don’t like it. An Acceptable Time does deal with time travel, like the original quartet, but chronologically,  An Acceptable Time happens last in the series. It was also the last of the books to be written, so it differs in tone and content from the others. Also (and now we come to the truth), I just didn’t care for it all that much.

The next two books—The Arm of the Starfish and Dragons in the Water—leave the realm of science fiction behind (though they tip the old hat to it every now and then), and deal more with what L’Engle refers to as Chronos—ordinary, linear time. They follow Meg and Calvin’s daughter, Polly O’Keefe, through an international incident and a murder mystery, before moving on to A House Like a Lotus, which is more of a coming-of-age story (this one is geared more toward older teens, by the way, so it contains more mature content than Many Waters).

These last three are less recognized, probably because they depart from the fantastic themes of the first four books, but if you’ve fallen for the Murry-O’Keefe clan and/or can’t bear to leave an invented world unexplored (like me), they are still worth reading.

So, why should you read any or all of these books?

To be honest, I’m suffering from L’Engle Fatigue right now—a rare condition that occurs when one reads fourteen consecutive books by the same author and, due to the presence of recurring themes and characters, has trouble remembering which book is which or what exactly I set out to tell you about them. But I’m pretty sure my thesis here is Read the Time Quartet.

You can take or leave all of the rest of the books, but you must read The Time Quartet. Madeleine L’Engle’s vision for the universe reminds me, in part, of that of C. S. Lewis’s Science Fiction Trilogy, in that it contains life in the unlikeliest places. She was able to challenge the way we imagine things—cherubim or unicorns, for instance—and recast those things in a serious, believable way, while involving them with clearly flawed but lovable characters who grow in leaps and bounds from book to book.

A Wrinkle in Time is a classic for good reason, and I would be remiss if I didn’t strongly urge you to read at least that. But if you find yourself smitten with the Murry family and with L’Engle’s unique exploration of the worlds around us (I bet you will), then read on, at least to the end of the quartet. Where you go from there is up to you.