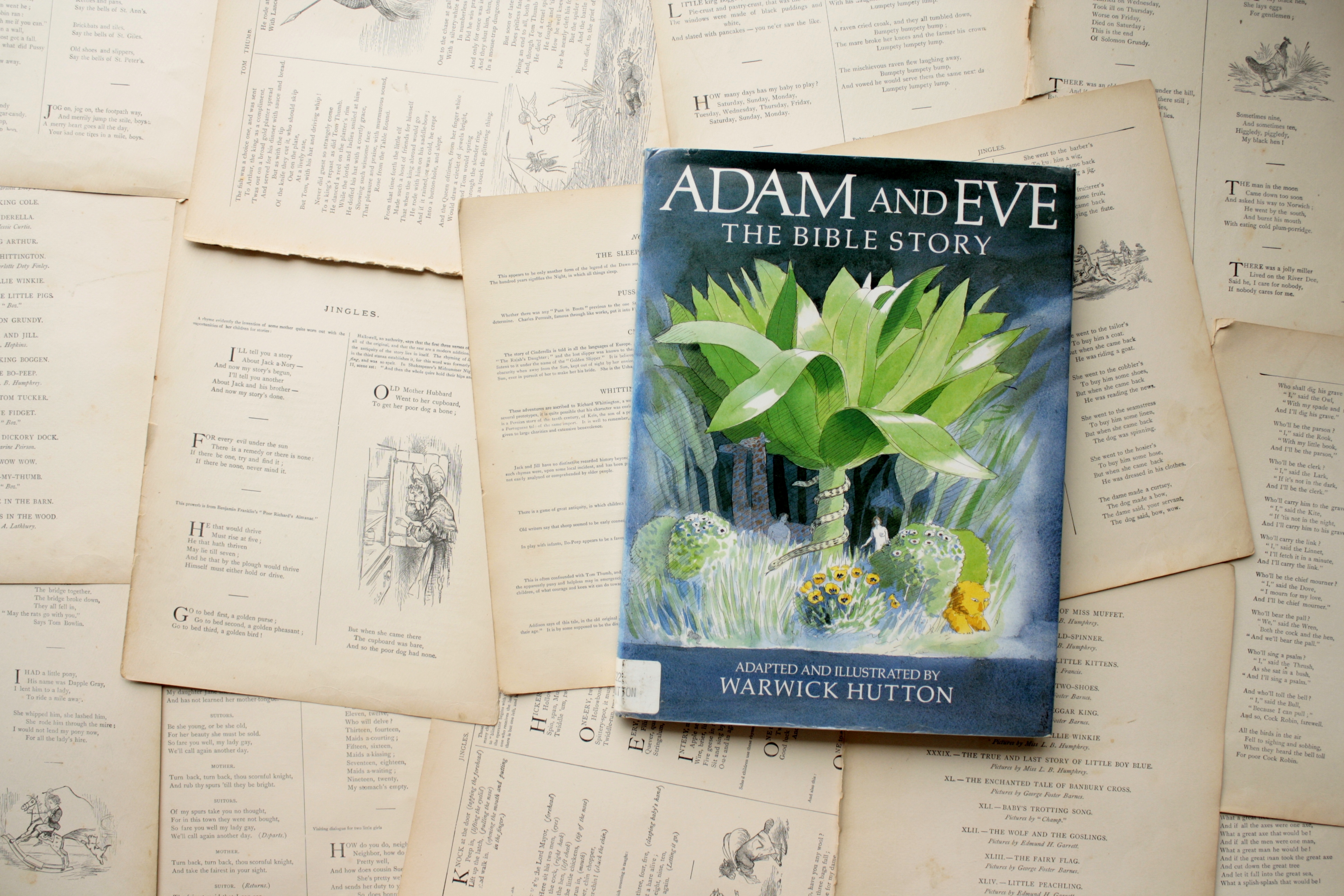 When illustrating the story of Adam and Eve, one must confront that Obvious Question: just what kind of fruit did Eve eat?

What I meant to say was, “Adam and Eve were naked. How does one handle that gracefully in a children’s book?”

Or, in other words, what did it look like to be naked and unashamed? (Before the Fall, I mean. We’re confronted fairly regularly with what folks think that looks like now, and I must say, that is no subject for a children’s book.)

The fact is, one can only use so many strategically placed leaves and limbs before the images begin to feel contrived, and yet one cannot have Adam and Eve simply stride around in their birthday suits. Right?

I picked up a copy of Warwick Hutton’s book at our local library, thumbed through it briefly and took it home. It wasn’t until I sat down to read it to my four-year-old that I realized that Hutton disagreed on that point: in his telling, Adam and Eve can and do stride around in the buff. And I think he made the right call.

As I reread Adam and Eve, I began to realize that while his depictions of Adam and Eve are, well, anatomically correct, there is a certain delicacy to his style that ensures that there is nothing vulgar about them. Instead, his images display an honesty that I didn’t realize had been missing from the other versions I’d read of Creation and the Fall. All those branches and oddly positioned animals may have been obscuring an important aspect of the story.

Adam and Eve were naked, yes, but they were also unashamed. Hutton’s depictions communicate that in such a way that I can’t help but realize that, if anyone is uncomfortable with this, it is me—not Adam and Eve (at least, not at first), and certainly not my daughter, who loved that book from the minute we sat down to it.

Now, full nudity is not all that Adam and Eve has to offer. Warwick’s images of Creation are striking—some of the best I’ve come across—and his imagined Garden of Eden is a place that I would very much like to explore. Through clean lines and watercolors, the way he places light in each picture is not only striking, but expressive. (Watch Adam and Eve move from the central places of light to the outskirts, in the shadows, and you’ll see what I mean.)

There is one more point that I must put out there: Hutton depicts God as more than a mere beam of light or misty cloud. He does it with that same delicacy, as no more than a cleanly outlined figure, but some folks may not appreciate that. I, for one, found it delightful to see Adam and God walking through the garden as companions, and devastating to see Adam and Eve standing, chastened, before him after the Fall.

So, would I recommend this book to every family? No. You know your children; you know where your line of comfort is drawn. But I would encourage you to give it a chance. Read it a few times, and see if you, like me, find yourself struck down with a longing for all that we lost in the Fall.