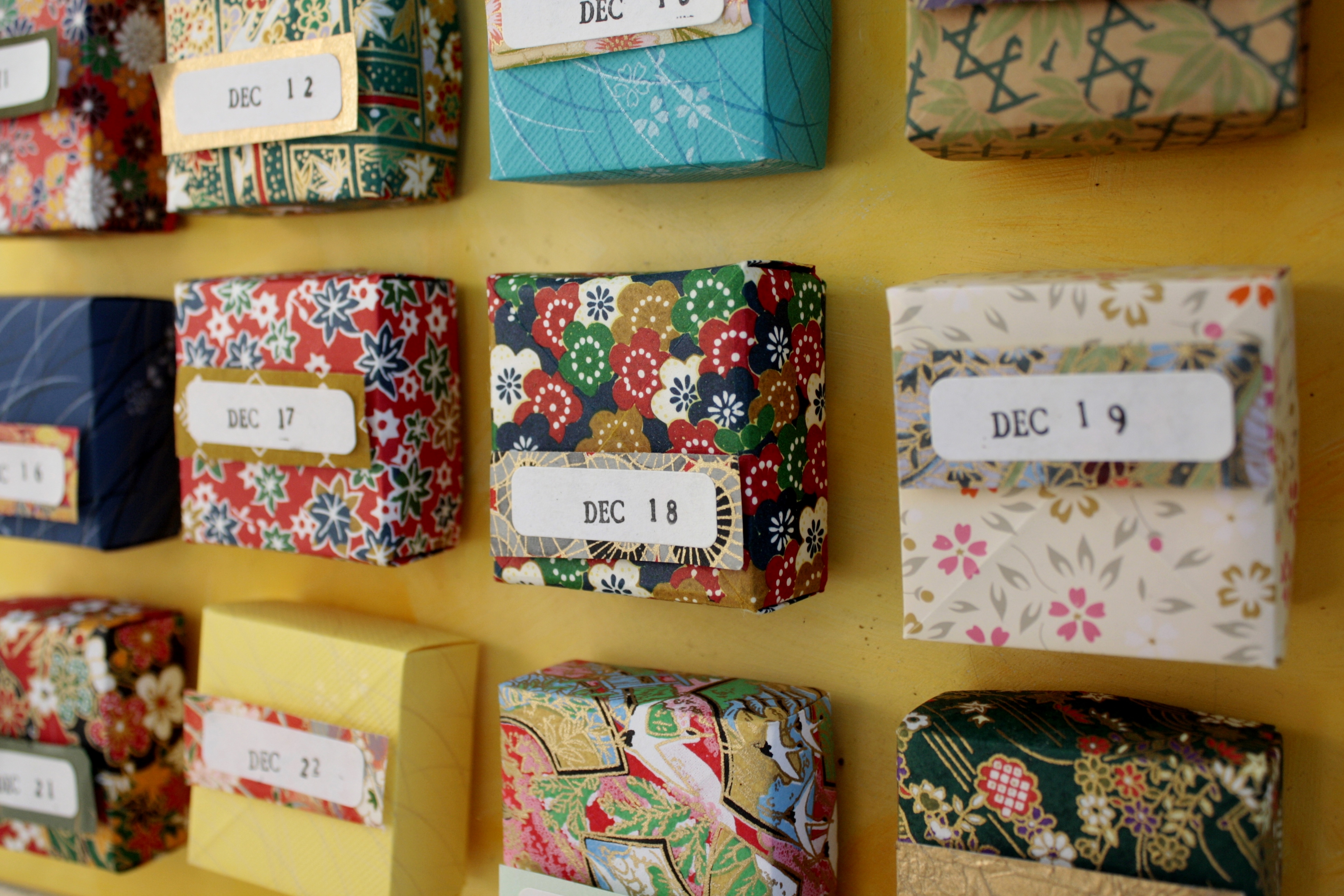 Years ago, I went on an origami binge. I think the flu may have been partly responsible for the stretch of time that I spent on the couch, watching Arrested Development and folding boxes, but I can’t be sure. What I do know is that for years afterward, a good portion of our closet storage was dedicated to what boxes were left over after I used at least two dozen of them to package the chocolate truffles that were that year’s Christmas gifts.

Did you catch that? I had tons of boxes left over after I used about two dozen of them to package Christmas gifts. And that only accounts for the boxes: there were origami ornaments, too, stars and cubes and some awkward cranes, plus paper quilts made from folded squares. I am not one for moderation when it comes to meditative folded-paper arts, apparently.

So there the boxes were, tumbling out of corners of our closet when we tried to find dress shoes and fallen scarves, tucked away with remnants of other, past binges: the jewelry binge. The hand-illustrated card binge. (The great knitting binge of 2008-2012 was still on the horizon, as was the present day watercolor-painting binge.) I began to despair of ever finding uses for all of those boxes, but I couldn’t bring myself to throw them away—they were too lovely.

But then, inspiration struck rather forcefully one morning in late November, about six years ago. Mitch found me digging through the closet at 5 am, pulling out not only the boxes, but also the library-style date stamp (left over from making our wedding album), scraps of origami paper, plain white labels, and the backing for a picture frame that had long since lost its glass. He grumbled something and went back to sleep; I took myself off to the living room where I worked until he and Lydia woke up. I tackled the project again during every spare moment until the evening of the next day, when I had this to show for my hard work:

Our origami Advent calendar has been with us for almost seven years now and has aged with surprising grace, though it is looking well-loved (sorry, DEC 24!). It seems that every year, someone asks about it—how I made it, how others might make one, too—and because of that, I once posted a tutorial on my old blog, Two Blue Buttons. But that blog is now retired and that post went with it into retirement. And so, because some of you have also asked about our calendar, and because I am enjoying branching out this Advent from book reviews into some Advent-themed DIY projects, I decided to write about our calendar for you, too.

I realize that the odds are against you having all the same miscellaneous stuff in your closet that I did, so rather than give you a full tutorial here, I’ll give you some simple guidelines for making a similar calendar, with some helpful links below in the “Resources” section.

The most important pieces, obviously, are the boxes. Once you’ve folded twenty-five of them (as mentioned, I find that episodes of Arrested Development pair nicely with this sort of project), all you really need to do is label them and then glue them to a base of your choice, be it painted board, a canvas, some sort of fabric-wrapped thing—I painted a large piece of drawing paper and wrapped it around the remnants of the picture frame.

Finally, fill them with stuff. In the past, we’ve done scraps of paper with service ideas or small squares of chocolate, but then I hit on the idea of filling the boxes with the ornaments for our Jesse tree, which felt delightfully like solving two problems with the same answer.

If you decide to make one of your own, I would love to see pictures!

Origami instruction sheets can be terrifying, but there is a lovely tutorial (with photos) for folding origami boxes on Creativebug. (The paper I used wasn’t as big as theirs—mine measured something like 6×6″.)

You can find some of my favorite origami paper on Amazon. (As you can see, I used quite a few different kinds for my boxes, but this link is for the stuff with the pretty gold details.)

Those library stamps aren’t hard to come by either.