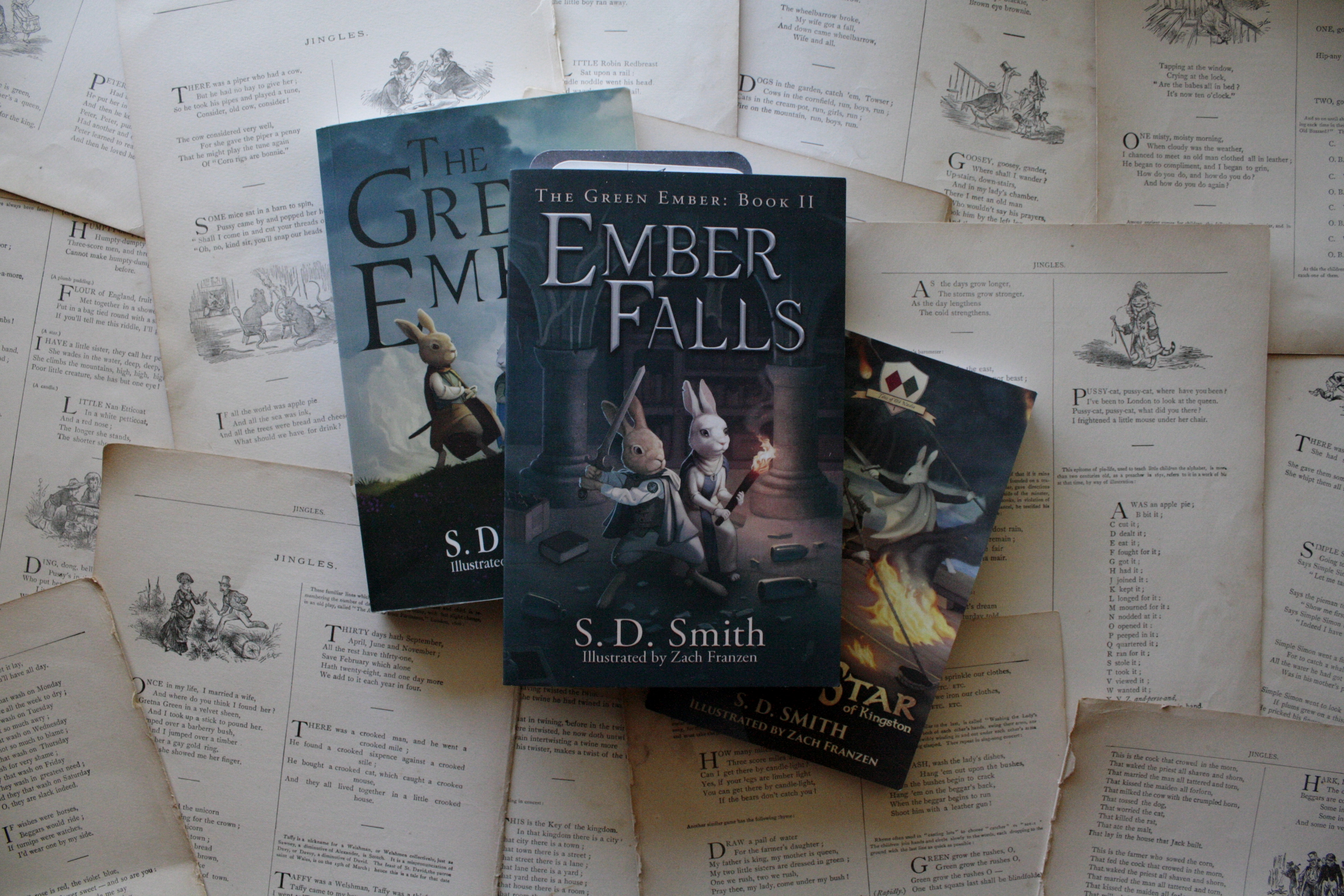 Ember Falls landed on our porch in a box full of goodies from S. D. Smith’s Kickstarter campaign. Oh, I thought. Yay! Lydia will like this.

I admired the cover.

I flipped it open to read the dust jacket.

I came to twenty-four hours later, starry-eyed, having finished the book.

In Ember Falls, S. D. Smith continues the story of Heather and Picket, who are no longer the young, lost rabbits of The Green Ember’s opening pages. Picket is a well-trained warrior; Heather is . . . well. I’ll let you read that part for yourself. But that development was one of many that I met with a satisfied, “Oh, yes. Of course.”

S. D. Smith has written a sequel that feels inevitable, as though the story developed itself. Nothing feels forced; nothing feels cheap. His characters work hard and suffer for their victories, and those victories are deeply satisfying.

S. D. Smith’s vision of hope in this series is potent, reaching beyond the pages of his books and into our lives as we read: as the characters fix their eyes on the Mended Wood, so we fix our eyes on a Better City. When my eyes stray from that City to the brokenness of this world, when I am tempted to believe that the brokenness is all there is or ever will be, then I am grateful for the faithful rabbits who remind me that we must go on fighting.

We must bear the flame.

Every book in this series is better than the last, which makes Ember Falls the best yet. And Ember Falls brought my eldest daughter into the fold: finally ready for the series, she read all three books in a week and now wears her “Bear the Flame” necklace proudly. (Even Sarah, who hasn’t read the series yet, adores her necklace. “It’s like Heather’s!” she tells everyone—even strangers at the grocery store. Then, confidentially, “Heather is a bunny.”)

Now, ordinarily, I would hustle you off the Story Warren shop with a link and nudge and a “What are you waiting for? Go read it!” But this week, I have a treat for you: S. D. Smith has graciously offered to send a set of all three books to one of you, plus your choice of either a “Bear the Flame” necklace or a set of stickers*.

The books are a great prize. Definitely. But my favorite part of opening a package from a beloved author was watching my kids make the connection that S. D. Smith is, you know, a human. A human who sends mail. And writes books.

They both immediately declared their intent to become authors and took up residence at the kitchen table with stacks of paper, pencils and erasers (and for writers, those erasers are super important). They may be writing fan fiction about their favorite series at this point, but that’s just a few degrees away from writing the next classic, right?

To enter, fill in as many options as you like in the widget below. The giveaway closes on Tuesday, Sept. 27 (I’m going to get it right this time, I really am). After that, a winner will be randomly selected and notified by email.

Entry-Form
*The actual stickers to show up in the winner’s mailbox may not look just like the ones pictured.

Previous PostLily, The Girl Who Could See | Sally Oxley
Next Post The One O’Clock Miracle | Alison Mitchell