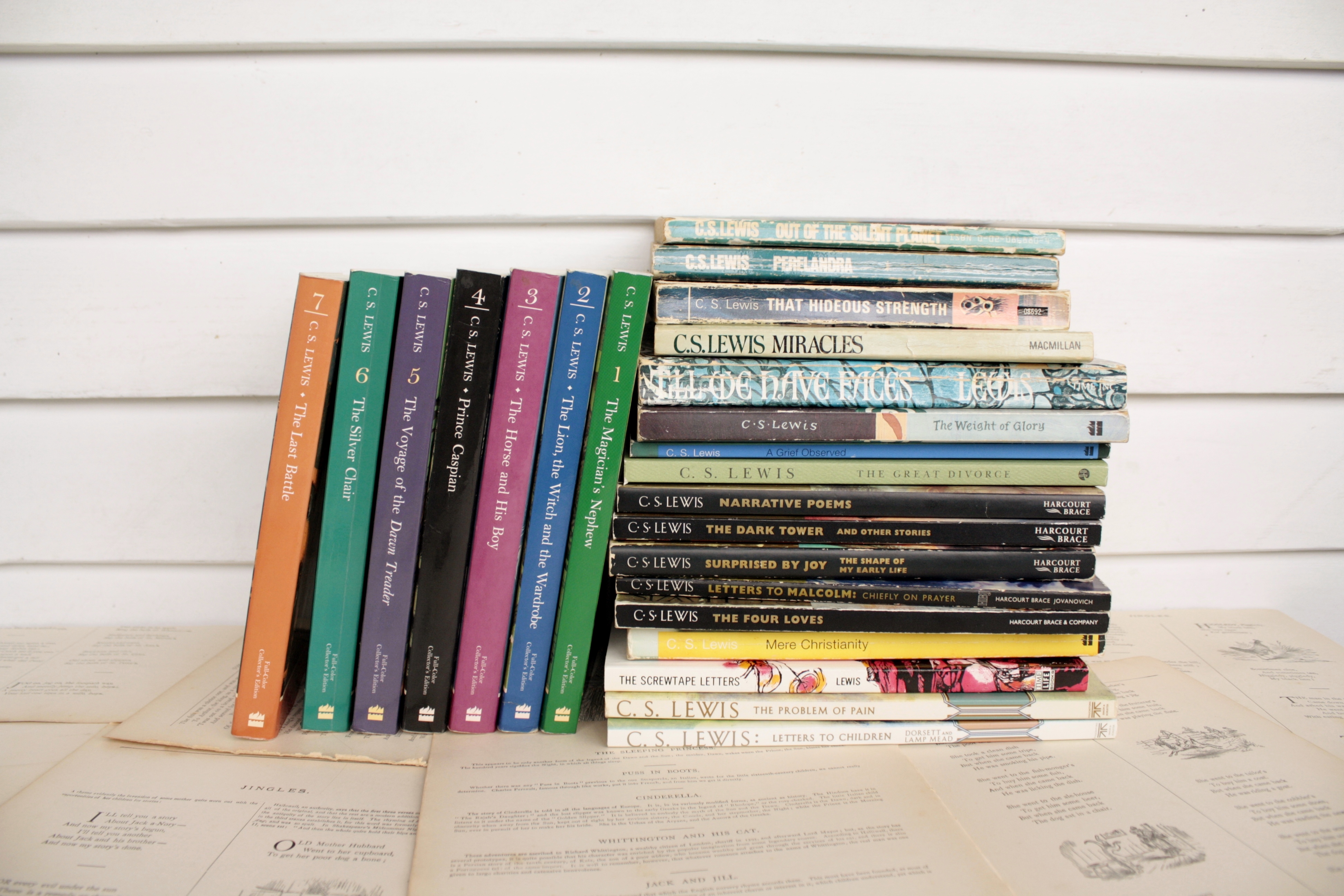 When I choose books to review on this blog, I find that there are some authors who have won my heart so thoroughly that I can’t decide which of their books to review first. These are the authors that I love for themselves, not for any single book, and whose name on the spine of an otherwise unknown volume is enough insurance for me to buy a copy without even peeking at the blurb on the back of the book. Introducing you to them is my way of saying, “Yes, we’ll get to the specific titles. But for now, just skip to the part where you read any book they have ever written.”

Today’s featured author is one who looms large in the recent history of Christian thought. He is one that you’ve doubtless encountered and may already love, but the thought that you may not have gone further into his work than The Chronicles of Narnia finally motivated me to put pen to paper and draft this post. Perhaps I’m reminding you of an old friend. Perhaps. But I hope that, for some of you, this post serves as a welcome introduction to a new author, one whose work will earn a well-dogeared place in your own library: C. S. Lewis.

To be perfectly honest, I labored through the first chapters of Mere Christianity when I first encountered it at 19. I made a few false starts before I pushed on through those introductory chapters and into the heart of the book, but once there I realized that I was in the hands of an author adept at explaining complex concepts, and I began to see that the very questions I wrestled with as a new Christian could not only be answered, but could be answered in a logical way. (I have read the whole book many times since.)

C. S. Lewis fought in one world war but lived through them both, and he was a writer that spoke specifically to his time. But his voice carries, and his answers to the big questions about God and Christianity still satisfy readers today, when we, like the British soldiers and civilians of his original audience, struggle to understand why we should bother with Christianity — or any religion—at all.

Yet while he reasoned clearly on complex issues, he was not above telling stories that still appeal to children as well as adults, Christians as well as non-Christians, bookworms and those who are only caught by a good, old-fashioned adventure. His works span every genre and range in level of difficulty from those written for children (The Chronicles of Narnia) to works for adults; they cover everything from the afterlife (The Great Divorce) to prayer (Letters to Malcolm) to the question of pain and suffering (The Problem of Pain), all from a layman’s perspective, but with a scholar’s depth and a pitch-perfect ear for language (and humor).

C. S. Lewis seemed always to have the perfect metaphor for the most abstract ideas, and that is, I suppose, why his illustrations turn up in sermon after sermon: if C. S. Lewis has written about the issue in question, then I doubt if anyone else has written about it better.

” . . . it would seem that our Lord finds our desires not too strong but too weak. We are half-hearted creatures, fooling about with drink and sex and ambition when infinite joy has been offered to us. We are far too easily pleased, like an ignorant child who goes on making mud pies in a slum because he cannot imagine what is meant by an offer of a holiday at the sea.”

— The Weight of Glory

The Chronicles of Narnia: these are the books that earned Lewis a place on this blog, after all.

The Space Trilogy: these are all worth reading, but I bet you’ll be particularly taken with the second book, Perelandra.

The Screwtape Letters: letters from a senior devil to a junior devil, on how to tempt and enslave a man.

The Great Divorce: an exploration of the afterlife, in narrative form. Utterly unforgettable.

Til We Have Faces: a retelling of the myth of Cupid and Psyche, told by Psyche’s older sister. Unique and absorbing.

Mere Christianity: an examination of what Christians believe and how they live in the light of those beliefs. A classic, and for good reason.

The Weight of Glory: a collection of talks and sermons given at various points in his career. One of my favorites, it contains a number of his best-known illustrations, and is a good introduction to his nonfiction.

The Four Loves: Lewis writes about the four different types of love.

Surprised by Joy: Lewis’s “autobiography of faith,” in which he examines his own conversion from atheism to Christianity.

Letters to Malcolm: Chiefly on Prayer: one side of a correspondence about prayer.

Reflections on the Psalms: a concise meditation on the psalms, from the perspective of Lewis as a layman. He answers some of the common issues in the Psalms (the vindictive violence, for example) in satisfying ways.

Letters to Children: sweet and charming responses from Lewis to the children who wrote to him about his Narnia books. This book is lesser known, but it’s a treasure.