I’d Be Your Princess | Kathryn O’Brien 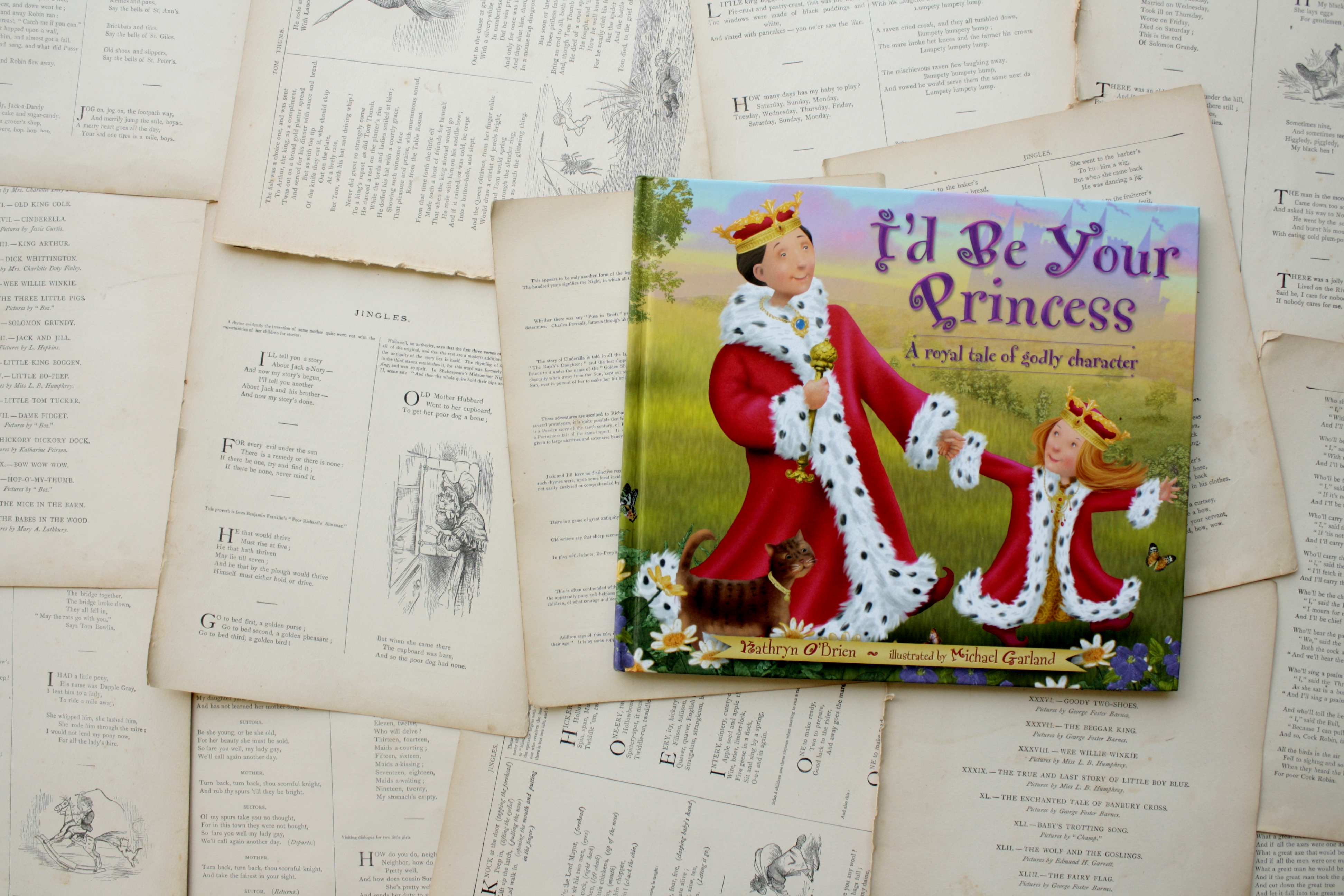 After the birth of our first daughter, we felt that general terror of new parents: We can’t do this. Raise a child? Us? Two years later, when we learned that we were expecting our second daughter, I felt a new pressure: we were evidently specializing in raising daughters. Shouldn’t we get it right? (Ha! As if we could.)

During each pregnancy I tend to lie awake at 3 a.m. fretting over something. With that pregnancy, it was princesses.

Somehow, the subject of princesses became, for me, a quicksand of pink tulle and glitter that swallows preschool-aged little girls up whole and spits them out, looking not like the quirky, unique creations they are but like carbon copies of some advertiser’s vision of The American Little Girl. I obsessed over this a bit.

When they reached the right age, I wondered, would our daughters develop a Princess Fixation? Would they want only princess-themed underwear, snack foods and books? Would they insist on wearing tiaras to the store, or answer only to “Your Royal Highness”? Would they swoon over an imaginary Prince Charming?

Looking back, I think I can safely say that though our girls have worn their share of tutus to the store and have spent hours playing dress up in, yes, princess dresses, we seem to have dodged the Fixation. They enjoy playing “Little House” and “Narnia” far more than they enjoy being royalty. And we’re glad: we don’t want our daughters to settle for the brief pleasure of being treated “like a princess.” They are daughters of the King, and we want them to live like it. A life lived in his family calls for confidence and grace, sacrifice and courage—not fluffy gowns and flimsy love interests.

Our approach to the issue of princesses has been pretty simple, and my grip on the whole subject has loosened with age (my age and my daughters’). But we’re four daughters in now, and have found the following two things most helpful in keeping our daughters their quirky, unique selves through the princess-plagued years:

There were a number of reasons for this decision, but the initial one was almost purely practical: both of our older daughters are very sensitive to scary movies, and those movies all have at least one scene that terrified me as a child (which tells you whose sensitivity they inherited).

Another reason that we have elected not to watch these movies with our kids is more, well, moral. Many of the Disney movies, like The Little Mermaid, discard the moral lesson of the original fairy tale in favor of a “happily ever after” ending. The Little Mermaid of Hans Christian Andersen’s version abandons her family for a foolish love, sells her voice for legs, tries and fails to woo the Prince and ultimately sacrifices her life for his. Disney’s Little Mermaid makes the same series of selfish choices, but still gets everything she wanted in the end.

But I am not permanently and forever anti-Disney. Our daughters have seen Frozen, and will probably watch the some of the other princess movies at some point. My hope, though, is that they will know the original fairy tales well enough by then to recognize what has been changed and to wonder why the filmmakers made those changes. We will talk about the stories together. But we have decided not to incorporate them into the culture of our home as something that we accept without question.

2) We look for books that feature awesome princesses

You know, ladies who have better things to do than fall head over heels for some dude that they met once, who know the responsibility that comes with their high office and who are willing to set aside their own desires for the sake of others. Who am I talking about?

Princess Irene of The Princess of the Goblin. The Queens Susan and Lucy, of The Chronicles of Narnia. Queen Esther of Persia. Belle, of the original “Beauty and the Beast” (my favorite retelling is in William Bennett’s The Book of Virtues). (I compiled a list of our favorite princesses, and you can find it here.) Also, the little girl in this book, I’d Be Your Princess.

This story is told simply, through the dialogue of a young girl and her father. “If you were a king, I’d be your princess,” she begins. And her father responds, using each comment to draw his daughter out and show her that what is required of a princess (or a little girl, for that matter) is not an outward beauty, but a beauty that begins deep within.

“Yes,” said her father, “and whenever anyone asked an important question, I would want your opinion, because you know how to make good choices.”

At the foot of each page is a corresponding Bible verse. For this one, it’s Proverbs 2:6: “For the Lord gives wisdom.”

This is a simple story and a very moral one, so I wouldn’t blame folks who find it preachy. I did, at first, but I am thankful now for any arrow in my quiver that will help my daughters navigate the very mixed messages about femininity already encroaching upon their childhood. Wisdom matters; your dad values what you think. The Bible is the first place we look for instruction. Those are important lessons and ones that I’m glad to teach my daughters through this simple story about a girl and her dad and a shared daydream.

For those of you with little boys, O’Brien has a companion book to this one titled If I Were Your Hero, and it’s equally charming. In fact, I might pick up a copy for my girls (who love the story), because it’s important for girls to know what to expect from boys, right?

. . . and one that cannot be stressed enough: as parents we all draw the lines in different places. You might be comfortable with your kids watching Disney movies, and I’d like to say emphatically that this isn’t an issue of Good and Bad Parenting, with Disney movies serving as some hallmark of Bad Parenting.

For our family, this was an important issue and so I feel strongly about it. I might try to persuade you to look at your stance again, but I will not criticize you for choosing differently. This entire post has to do with our family and the places where our lines fall.

If you’d like to read more about princesses (on either side of the fence), I highly recommend Drew Dixon’s article “Disney Princesses: My Daughter Deserves Better” and, for balance, Mike Cosper’s pro-princess piece, “Are Fairy Tales Finished?“