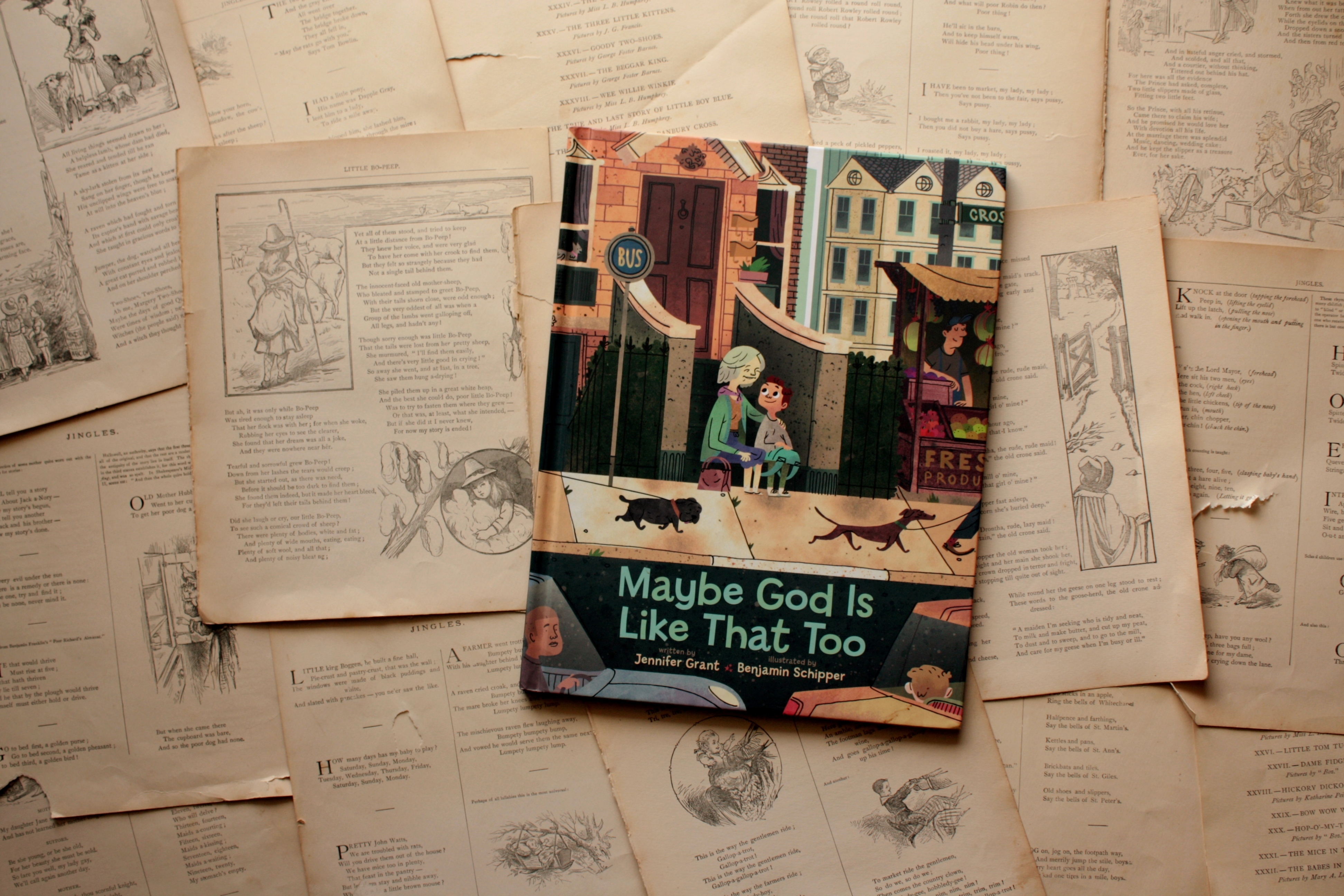 An unseen God can be hard to explain to children, but not, I think, because they find him hard to believe in. They are better at that than we are. When my daughters and I discuss him, I am the one who fumbles for words to describe him without a picture to point to and say, “There he is! That’s him.” Creation itself is one of the best teachers, and that is where I tend to point. We see God’s exuberance in flowers, whose geometric designs tempt us to think that they are carbon copies of one another, but they are not: each bud on each stem has its own personality—a fragment, in some way, of him.

Trees speak of his patience in low, quiet voices.

Spiders speak (in whispers that make us shiver) of his precision, his delight in making beautiful webs from eight-legged, unsettling beings.

Music sings of his joy.

In Maybe God is Like That, Too, Jennifer Grant narrows the scope from all of creation to us, his people, and through a conversation between a young boy and his grandmother, illustrates the way we can study God through the actions of others. At first, this sounds a bit pantheistic, as though God is in all things, but as the book goes on it becomes clear that Galatians 5:22-23—the fruit of the Spirit—is guiding their discussion. When the young boy asks his grandmother what God is like, she points him outward, toward the world around him, and says that when we see those things, we see God, too. We see, through the rest of his day, how watches for these things and finds examples of love, joy, peace, patience, kindness, goodness, gentleness, and self-control in the people around him.

That conversation is one reason we loved this book. But another reason we loved it was Benjamin Schipper’s illustrations: he gave this family of grandmother and grandson such personality through the way he depicted their apartment, their surroundings, their affection for each other. We have been talking lately about the different shapes families can take, and so it was neat to see this grandmother caring for her grandson in a way that wasn’t a part of the story itself, but a foundation for it. Her tenderness and sacrifice, regardless of the reason she is his guardian, sets the stage beautifully for their conversation on the fruit of the Spirit, for in raising him, she displays all of these things herself.

Speaking of Benjamin Schipper: if you recognize his style from Jennifer Trafton’s book Henry and the Chalk Dragon, there’s a very good chance you already know and love his work!

Maybe God is Like That, Too
Jennifer Grant, Benjamin Schipper (2017)