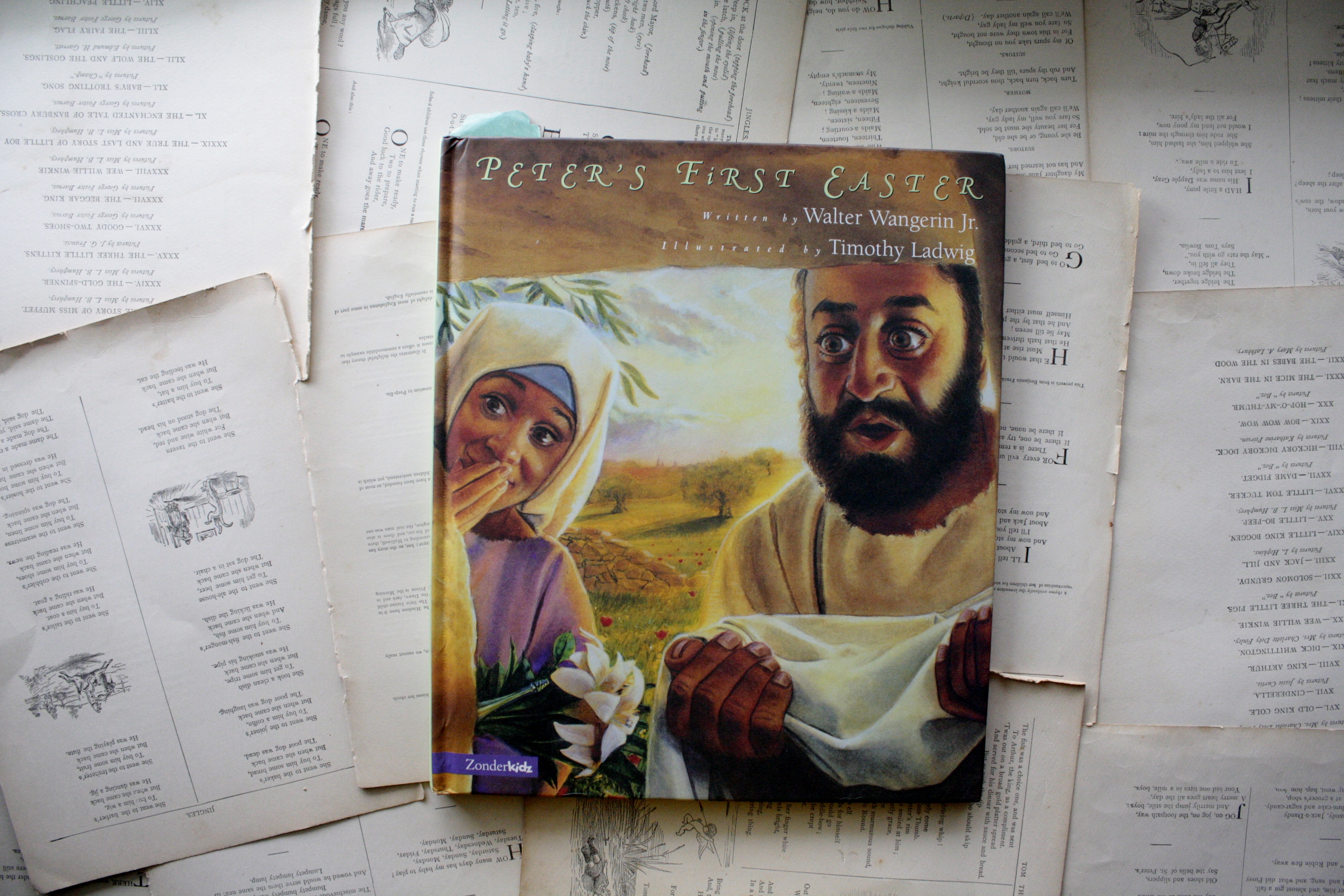 Last week, I voiced some rather strong opinions about Bible stories that put peripheral characters in starring roles, but after rereading Petook to my children and preparing to review today’s book, Peter’s First Easter, I realized that I stand rather firmly corrected.

You see, all three of my Easter 2014 reviews feature books that are fantastic examples of how well a simple shift in perspective can refresh a story: in Petook, we saw the event of the Crucifixion through the eyes of a rooster, who stood, in a way, for creation; in The Donkey Who Carried a King, we followed Davey, the donkey; and in Peter’s First Easter, we leave the farm animals behind and read about the last week of Jesus’s life through the first person account of Peter (as envisioned by the author).

Let me tell you one thing up front: Peter’s First Easter is a deeply moving book. You (if you’re That Sort of Person—I am) will probably cry. You see, Wangerin puts the reader right in Peter’s shoes, describing his love for Jesus, as well as his shock at some of Jesus’s pronouncements—the ones we take for granted, as part of a well known story, but that must have sounded dissonant and strange the first time they were voiced.

This is my body. Take and eat.

And what must Peter have felt after that third denial of Christ? Wangerin presents a beautiful and believable story that allows us to view the Crucifixion through the eyes of one who is painfully aware of his own brokenness and who fears that nothing will ever be strong enough to restore him—even as he watches the very event that will restore him.

Despite Wangerin’s use of past tense, there is an urgency to both the language and the illustrations that brings the story near to us, the readers. Tim Ladwig respectfully avoids showing Jesus’s face and uses unusual perspectives—strong diagonal compositions, showing characters in profile or from above—to achieve a sense of inclusion: as the crowd thrust their fists in the air, screaming, “Crucify him!”, the people are depicted at such an angle that we seem to be standing among them with our own fists in the air. And he has a knack with facial expressions: the tears welling up in Peter’s eyes, his expression of wonder at Jesus’s words, the joy and laughter on the disciples’ faces as they meet Jesus, resurrected, for the first time—Ladwig captures them all perfectly.

This is a lengthy picture book, divided into ten short chapters, so you can read it all at once or in stages—a chapter or two per day throughout Holy Week, perhaps. However you do it, though, don’t rush! This is a book to be savored, one to linger over and explore with little ones.

Previous PostThe Donkey Who Carried a King | R. C. Sproul
Next Post To Everything There is a Season | Jude Daly