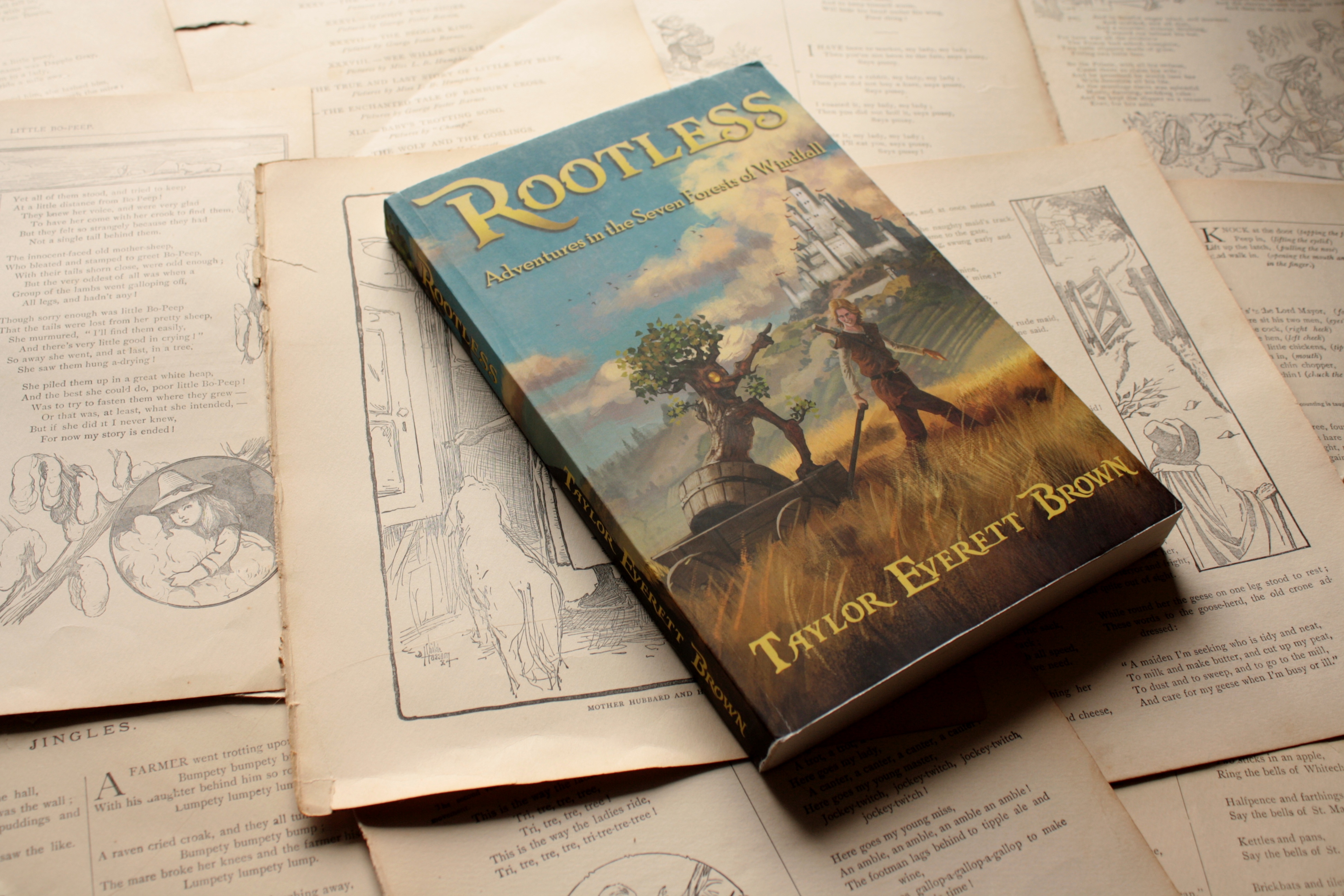 Taylor Everett Brown’s book Rootless is an adventure story set in the fictional (and fantastic!) realm of Pateramor. He kindly answered some questions for us so we can learn more about the story behind Rootless and about him, the author behind the story.

Can you tell us a little bit about yourself?

Sure, I’m a giant nerd who aspires to great adventures, fantastic romance, and saintly holiness. And, every once in a while, I come close to reaching those aspirations.

For example, I once managed to pluck a diamond out of the glittering, salty sea-spray of the Texas coast. Realizing the miraculous nature of what had taken place, I dropped to a knee and proposed to my (now) wife, stunning her just long enough to secure a “yes” and sweep her off her feet!

Since then we have set about the serious(ly fun) business of building a home and filling it with amazing children.

And on a related note, I am certain that I am called to the vocation of fatherhood because I have been telling dad-jokes my entire life.

What inspired you to write Rootless?

I’ve always enjoyed faerie tale stories, whether they came in books, video games, or songs. And, as faerie tales tend to do, they inspired my own musings on the origins of magical worlds, fantastical beasts, and wonderful peoples.

I started capturing those ideas and writing them down while I was in college and, after more than a decade, they had grown into a living breathing world. I knew it was special and I wanted to do something with it. I just lacked the resolve and the focus. Then my son, Everett, came along and provided the spark I needed to write my first story in the world of Pateramor.

I thought it would be so much fun to write a little bedtime story, starring my son, that I could read to him throughout his childhood. Well, the bedtime story turned into a series of bedtime stories and, finally, into the full novel, Rootless. I was so happy with it, I decided to publish it.

I loved reading about the different forests of Pateramor. Which part of Pateramor would you most like to visit?

It makes me so happy to hear you say you loved reading about the forests. I wanted the forests to be like characters in the book, each with their own personality, feel, and quirks. I really enjoyed writing about them.

Rootless takes place in the Kingdom of Windfall, which is only one small part of the world of Pateramor. But even just in Windfall, there are so many places I would like to visit. From the serenity and solitude of the Singing Mountains to the hand-made grandeur of Fortuna to the other-worldly beauty of the glowing forest. It’s hard to choose!

But, for me, I think the dragon forest edges out the rest of the destinations. I just love dragonapple trees. Everything about them, from their warmth, to their giant fruit, to the ecosystem they create is intriguing.

And, between you and me, I will admit that I designed the dragonapples to really appeal to someone with my taste buds. That mixture of sweet and spicy is something that I relish. I would love to try one.

Of course, what really seals the deal is the dragons. Who doesn’t want to see dragons? Especially dragons as exhilarating and as beautiful as phytodrakes?

What are some of your favorite books? Which ones particularly fuel your writing?

I recently read Augustine’s Confessions and it is incredible! It reads as easily as a modern novel and the troubles he deals with in his life are so easy to relate to . . . and yet it was written 1600 years ago!

The Count of Monte Cristo by Alexander Dumas is one of my all-time favorite books. It’s thrilling and inspiring from beginning to end, which is saying something given how much story it packs between its covers.

I also really enjoy reading anything by C. S. Lewis. One gem of his that not many talk about is Perelandra from his sci-fi trilogy. C. S. Lewis is so good at speaking about evil and there’s a scene in the second book where he explores what it was like when Eve was tempted in Eden. It is deliciously terrifying!

But in the end, J.R.R. Tolkien is still my favorite. When I need to get inspired to write I reach for him. The completeness of his world, the beauty of his language, and the sheer size of his story, you just can’t beat it. I can re-read his books over and over and I am always in awe.

Can we look forward to any new books from you?

You know, I do have a second son now, Augustine Michael Brown. And it would be a shame for him to grow up hearing and reading about his brother going on faerie tale journeys and not have any himself.

Yes! I am thrilled to announce that I have begun writing a second story in the world of Pateramor! I’m aiming to complete it before the end of the year. So stay tuned!

Always! If you want to know more about the me, the books, or the world of Pateramor, I encourage you to go and explore Pateramor.com. I’m slowly building up a treasure trove of information on that website to fill in the blanks between the books.

For example, right now there’s a great article on the race of little inventors called the Munchkins (to which readers were introduced in Rootless). And I hope to soon publish an article on their “superior” brand of technology called “munchkintech”.

Check it out and let me know what you think!