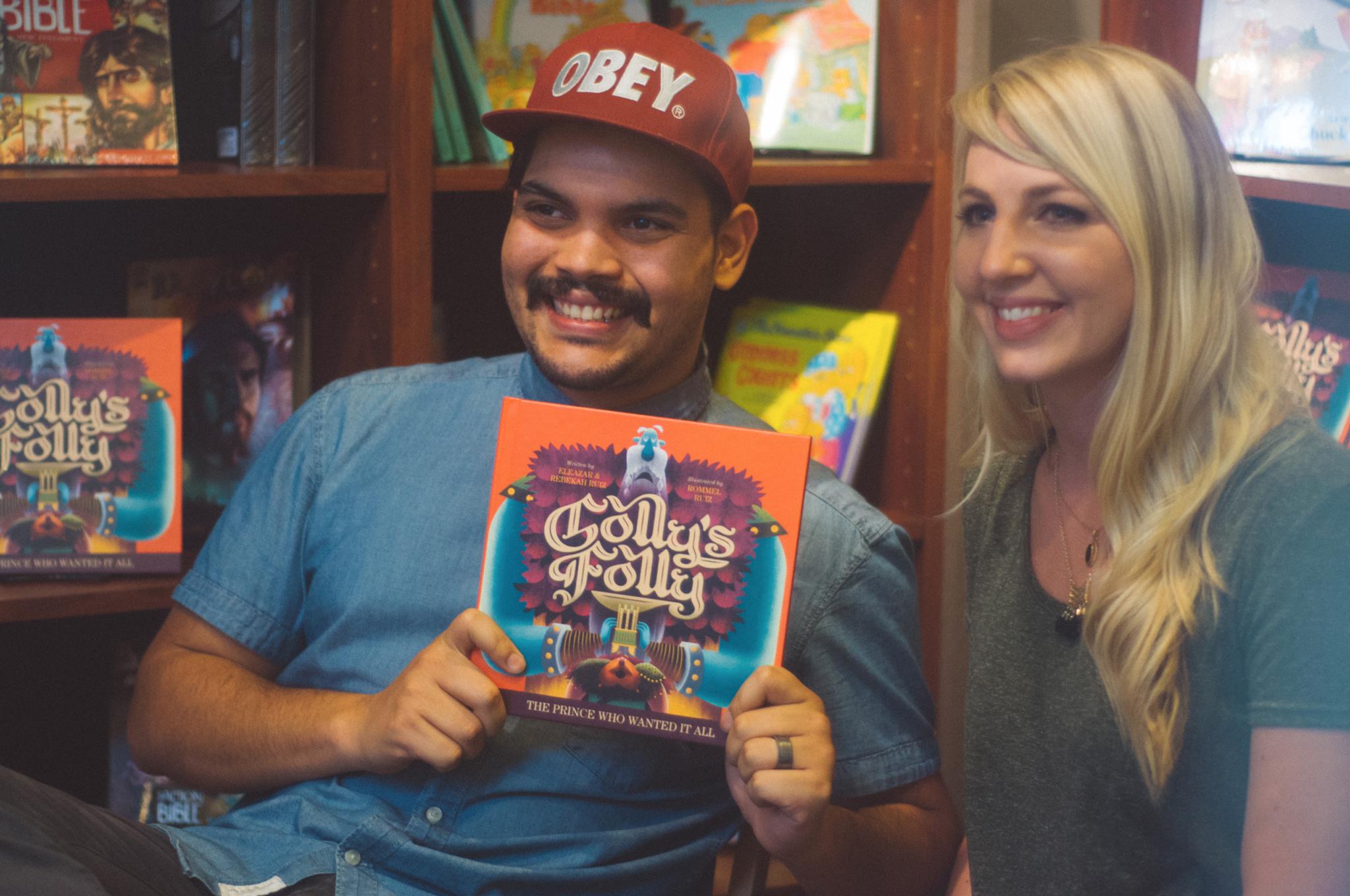 Last week, I told you all about Golly’s Folly. This week, you get to hear from the authors themselves! We’re also giving away a copy to Golly’s Folly today (details on how to win are at the end of this post).

Can you tell us a little bit about yourselves?

Eleazar: I’m a graphic designer by day and a publisher/art director by night. My background as  a graphic designer/art director has been helping, serving, and equipping churches to communicate effectively to their different audiences through the mediums of branding and design. Other clients include Microsoft, Xbox, Focus on the Family, Tooth & Nail Records, among others.

Bekah: I’m an educator at heart and just love to be around people in general. I’ve worked with elementary kids, middle schoolers, and college students. I’ve been working in higher education for 6 years now. I love DIY projects, coffee, and learning more about the publishing world with Ele.

Why do you think kids need to hear Golly’s story?

Eleazar: I think people including myself have the tendency to intentionally and unintentionally seek happiness, contentment, and fulfillment in all the wrong places. Some people turn to finding fulfillment in relationships, others in money, and some simply find their meaning in what they do 40-60 hours a week.

I believe that is our natural bent and it starts at a young age. I personally realized it in my twenties. I realized that everything I had worked for up until that point in time and everything I’d accomplished had been done in hopes to satisfy me or fulfill me. At one point I expected my wife to be the person to “complete” me (like Jerry Maguire would say). Other times I sought that satisfaction in my job or in people’s perception of me.

Golly’s Folly is simply our way of giving kids a heads up about this tendency. At some point they will unconsciously expect things like the ones I mentioned to satisfy them. We are here to say, from a Christian worldview, that the only place such satisfaction can be found is through a loving relationship with our loving father, God.

Bekah: I believe kids have brilliant minds, and are so capable of taking in this message. We often underestimate them. When everyone in their classrooms and everything in the media is telling them to “get this” and “buy that,” we want them to hear that seeking things first will not give them the satisfaction in their hearts that Jesus can.

I would love to hear more about your publishing company, Patrol Books. What is your vision for the company?

Eleazar: At Patrol Books, we are trying to raise the expectation people have about Christian art. Have you ever been to the theater and stared at all the movie posters for upcoming movies? And then noticed one of those posters had a religious bent? Once you perceive that, you think to yourself, “Nah … I’ll pass.”

Recently we’ve visited several bookstores due to our latest book release and have found the same is true in the children’s religious section at those bookstores. Those shelves have been either half full or filled with poorly executed content. No wonder people don’t expect much of Christian art! We believe it is our (Christians’) responsibility to change that perception.

Bekah: The selection [of excellent Christian children’s literature] is kind of sad, really. In “religion and social issues” within the children’s section at bookstores, we found a slew of books on potty training, learning manners, pregnancy (new sibling), one or two children’s bibles, a handful of Islamic writings, and that was it.

Patrol Books exists to create content that is both orthodox in its theology and surprisingly beautiful in its content. We are here to raise the bar. And we are tasking ourselves with literature to start.

Golly’s Folly is beautiful, both in the illustrations and in the way it actually feels as a book. It’s clear that the physical presentation of the book matters a lot at Patrol Books. Why do you think it’s important for a book to be beautiful and well-written?

Eleazar: We believe beauty and sound theology should be inseparable simply because the epicenter of Christian theology is God himself. A God who proves his care for beauty in multiple instances in the Bible. Starting in Genesis with the creation of Eden, then again in the building of his temple in Exodus 31, and ultimately bleeding over all the way to the book of Revelation where the heavens, the place of God’s throne, are described. God often uses the beauty aesthetic to communicate something about himself in the same way he uses the ugly aesthetics to describe sin. To quote Dr. John Piper [Bible scholar, teacher, theologian], “Nothing ugly is ever called glorious in the Bible.”

What’s next for you as authors?

Eleazar: Most of our time is currently focused on making sure Patrol Books succeeds as a business and in the midst of that we’ll be working on the second book of the Golly’s Folly series for which we already have a title!

What’s next for Patrol Books?

Eleazar: There are a lot of exciting things on the horizon for Patrol Books. In the next year people should expect us to release two or three more books from other authors. But we are trying our hardest to not make you all wait until next year! This holiday season could be a particularly exciting time for us at Patrol Books, so please stay tuned!

Enter to Win a Copy of Golly’s Folly

To enter, fill in as many options as you like in the widget below. The giveaway closes on Friday, Nov. 18. After that, a winner will be randomly selected and notified by email. Best of luck to you all!