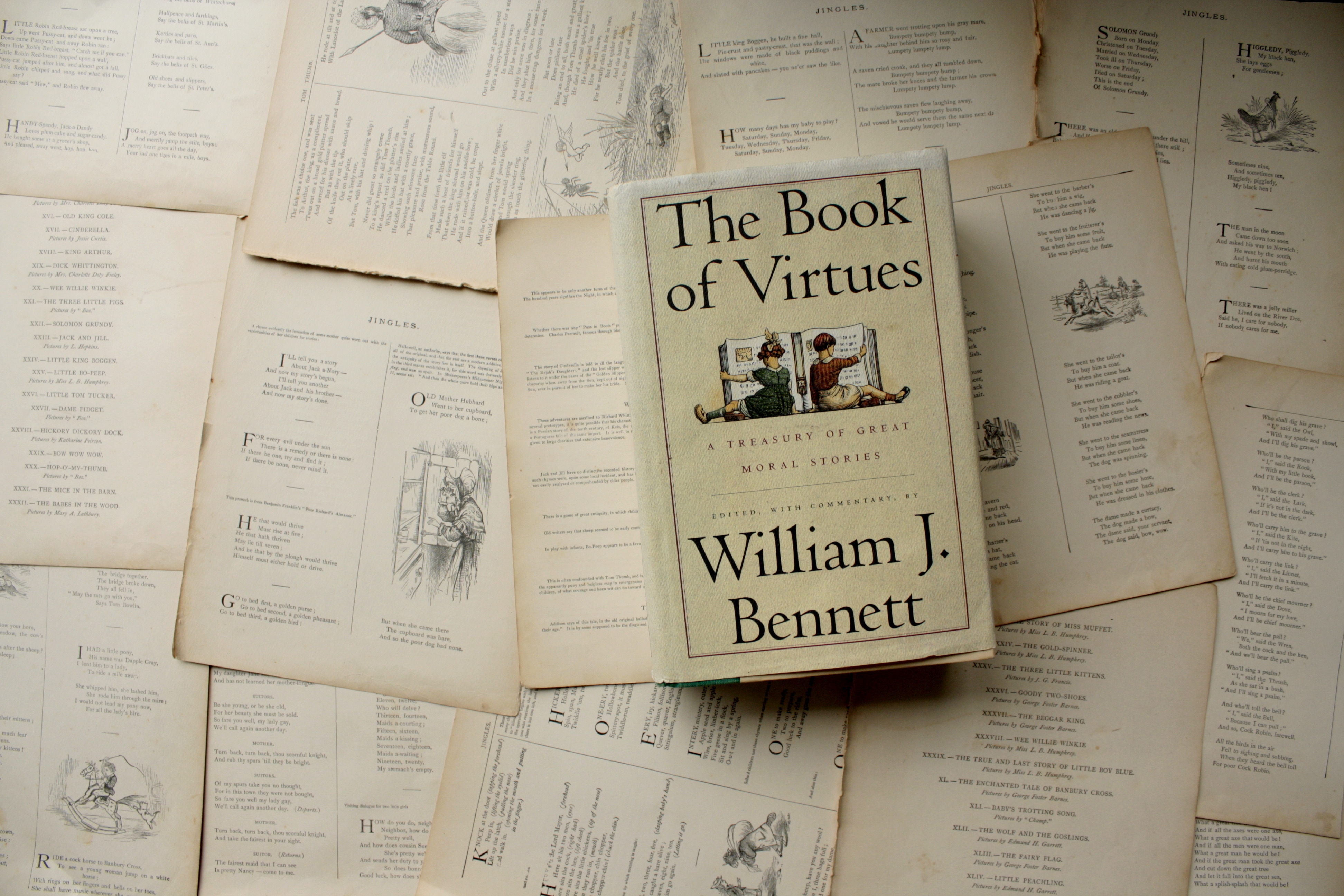 Based on the title alone, one might assume that The Book of Virtues is a dusty, half-forgotten classic chock full of words like “assuage.” But one would be sorely mistaken.

The Book of Virtues was published in 1993, when William Bennett, a former Secretary of Education, noticed that many children were growing up with a moral deficiency: concepts like loyalty were difficult for these children to identify, let alone put into practice, because they didn’t see them lived out in the lives of parents and peers. Many had lost contact with the wealth of literature that once trained children to value things like compassion, honesty and perseverance.

To meet this need, Bennett looked back  at our existing literature and history:

“Every American child ought to know at least some of the stories and poems in this book. Every American parent and teacher should be familiar with some of them, too. I know that some of these stories will strike some contemporary sensibilities as too simple, too corny, too old-fashioned. But they will not seem so to the child…And I believe that if adults take this book and read it in a quiet place, alone, away from distorting standards, they will find themselves enjoying some of this old, simple ‘corny’ stuff.”

And so, Mr. Bennett set out to compile some of the classic moral stories into a format meant for browsing. Within longer chapters with titles like “Responsibility,” “Friendship” or “Courage,” he ordered the content from nursery rhymes to more challenging pieces by Aristotle, say, or Cicero. Everything else fits neatly in between, so there’s something in every chapter for every age.

I passed over a few selections–gruesome fairy tales, or old poems in which a child misbehaves/is selfish/slams the door and promptly dies–but most of them are wonderful: stories by Tolstoy and Oscar Wilde that brought me to tears; fairy tales told so beautifully that they bear little resemblance (sadly) to the simplified versions told today; poems with meat on their bones and blood in their veins.

Bennett includes beautifully written biographies on figures like Harriet Tubman, the Wright Brothers and Clara Barton. A letter from F. Scott Fitzgerald to his daughter (quote: “Don’t worry about flies. Don’t worry about insects in general . . . Don’t worry about boys.”) Re-tellings of passages of the Bible, as well as excerpts from The Odyssey, Roman history, Greek myth and Shakespeare.

One can’t help but feel well read as one reads on.

Though Bennett states that this book is not meant to be read cover to cover, I couldn’t restrain myself: I took page markers along with me and marked my favorites as I read, and now I can pull out a poem to illustrate a point, or a story to fit a theme on any given day. (These classic stories make great fodder for storytelling, too, when book isn’t handy.)

We also have a children’s edition of The Book of Virtues, complete with color illustrations, but it just doesn’t get better than the simply illustrated original: this is a book that will grow with our family for years to come, and I look forward to leaving it out for my children to find and explore on their own.

Previous PostThe Chronicles of Narnia | C. S. Lewis
Next Post All The Small Poems and Fourteen More | Valerie Worth